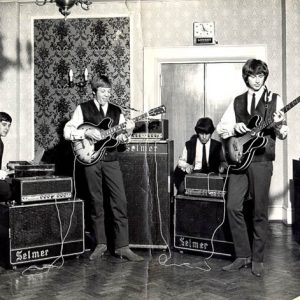 The Background to Guitar Amplifiers

Guitar amplifiers can also modify the instrument’s tone by emphasizing or de-emphasizing certain frequencies, using equalizer controls like bass, middle and treble, and by adding electronic effects; distortion (also called “overdrive”) and reverb are the most common built-in features. The input signal comes from a “pickup” on the guitar. For electric guitar players, their choice of guitar amp and the settings they use on the amplifier are a key part of their signature tone or sound. Some guitar players are longtime users of a specific amp brand or model. Many electric guitar players use external effects pedals to alter the sound of their tone before the signal reaches the guitar amp.

The cone speaker was not offered for sale until 1925. The first amplifiers and speakers could only be powered with large batteries, which made them hard to carry around. The first mains operated amplifiers were developed for theatres and public address systems and were very expensive. It was only after 1927 that smaller, portable AC mains-powered PA systems that could be plugged into a regular wall socket became popular with musicians. During the late 1920s to mid-1930s, small portable PA systems and guitar combo amplifiers were fairly similar. These early amps had a single volume control and one or two input jacks, field coil speakers and thin wooden cabinets – no tone control or on-off switch. 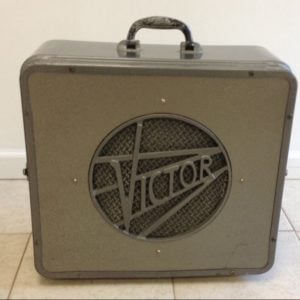 Over the years various effects like reverb, tremolo and vibrato were added to the standard combo amp range.  These early amplifiers used valves (or tubes) to modify the input signal and boost the volume. In the 1950s, several guitarists experimented with distortion produced by deliberately overdriving their amplifiers, including Elmore James, Chuck Berry and Link Wray.

Distortion became more popular from the mid-1960s, when The Kinks guitarist Dave Davies produced distortion effects by connecting the already distorted output of one amplifier into the input of another. Later, most guitar amps were provided with preamplifier distortion controls, and “fuzz boxes” and other effects units were engineered to safely and reliably produce these sounds. In the 2000s, overdrive and distortion has become an integral part of many styles of electric guitar playing, ranging from blues rock to heavy metal and hardcore punk. 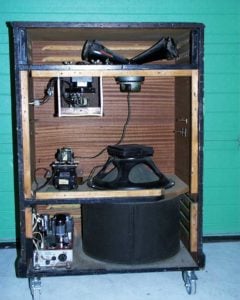 Over the years many styles of amplifier have been design to suit specific musical instruments like the organ, acoustic guitar, bass guitar and electric piano. Each instrument has different frequency ranges and different circuit design is required. Electric guitarists have experimented over the years with using some of these amplifiers to get a different sound or tone. For example, Hammond organ players used a specialized keyboard combo amplifier, the Leslie speaker cabinet, which contains a woofer for the low frequencies and a horn for the high frequencies. The Leslie horns rotated and a baffle around the woofer rotated as well, producing a chorus effect. Don Felder of the Eagles used a Leslie to create the swirling chorus effect on the song Hotel California. 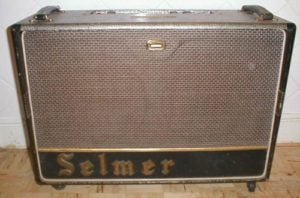 A valve combo guitar amplifier or tube amplifier is a type of electronic amplifier that uses vacuum tubes to increase the amplitude or power of the input signal. Valve amplifiers are easily recognized as the tubes are generally exposed to allow them to cool and they have a distinct glow when switched on. The valves can be seen in the left image of a Selmer Zodiac.

Vacuum tubes (called “valves” in British English) were by far the dominant active electronic components in most instrument amplifier applications until the 1970s, when solid-state semiconductors (transistors) started taking over. Transistor amplifiers are less expensive to build and maintain, reduce the weight and heat of an amplifier, and tend to be more reliable and more shock-resistant. Tubes are fragile and they need to be replaced and maintained periodically. As well, serious problems with the tubes can render an amplifier inoperable until the issue is resolved.

In the 2000s, high-end tube instrument amplifiers survive as the few exceptions, because of their perceived sound quality. Tube enthusiasts believe that tube amps produce a “warmer” sound and a more natural “overdrive” sound. Typically, tube amps use one or more dual triodes in the preamplifier section to provide sufficient voltage gain to offset tone control losses and drive the power amplifier section. While tube technology is, in many ways, outdated, tube amps remain popular since many guitarists prefer their sound. If you see a live concert you will notice most top guitarists use old valve amplifiers from the 60’s and 70’s this is due to the quality of sound. 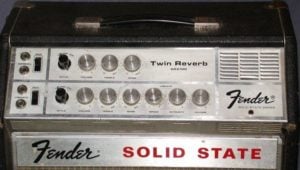 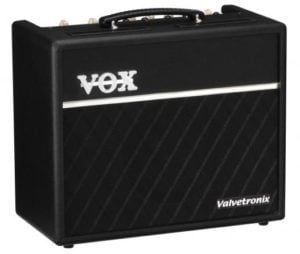 A hybrid guitar amplifier involves one of two combinations of tube and solid-state amplification. VOX released a range of “Valvetronix” amplifiers which also include modeling features, the VT-20 is shown left. The settings available allow the user to select various amplifier styles and to add a range of effects. This means that a wide range of guitar sounds and styles can be replicated for one small amplifier without the need for many effects and cables. Selecting the various settings can be done via a foot-switch.

The input is via a special “valve” preamp stage which gives a thicker tone and this is then fed to the solid state final output stage.

By combining these features the amplifier is smaller and not as heavy as a conventional valve amplifier which requires transformers to power the output stage. See the Selmer amplifier image above. 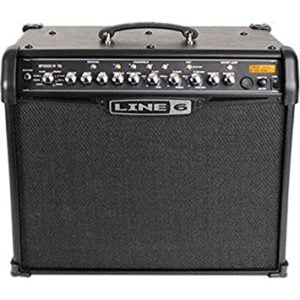 A modeling guitar amplifier uses microprocessor technology with digital on-board effects to create numerous different sounds and tones that simulate the sound from a wide range of classic tube amplifiers and different sized speaker cabinets, all using the same amplifier and speaker. The settings on the amplifier can be combined and saved to slots within the amplifier to be recalled when required.

These modeling amplifiers can be programmed to the user’s taste and also to allow the use of a foot-switch to switch between saved programs. Some newer models have a USB connection to a home computer.

Brands to check out are Blackstar Amplifiers and Line 6 Amplifiers are credited with bringing modeling amplification to the market. These amplifiers can be used in a wide range of applications from the home, studio and live. 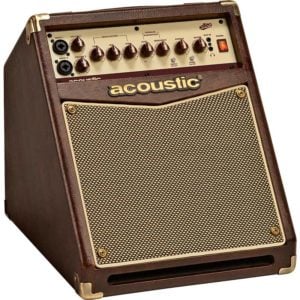 These amplifiers are intended for use with acoustic guitars, especially for the way these instruments are used in relatively quiet genres such as folk and bluegrass. They are similar in many ways to keyboard amplifiers, in that they have a relatively flat frequency response, and are usually designed so that neither power amplifier nor speakers add coloration. Acoustic guitar amplifiers are designed to produce a “clean”, transparent, “acoustic” sound when used with acoustic instruments with built-in transducer pickups and/or microphones. The amplifiers often come with a simple mixer, so that the signals from a pickup and condenser microphone can be blended. Since the early 2000s, it has become common for acoustic amplifiers to include digital effects, such as reverb and compression.

The YUMAGOLD website has been as a one stop shop for your guitar and audio gear. Our unique review system collects prices from across the web and displays them in a list. Review the SAVE button in the top menu for examples of current savings.These are chosen as they have very strict consumer controls to protect the buyer. This web site is constantly expanding and new products are being added daily.

Join the mailing list using the link below to receive weekly emails showing the latest deals that are available online with high quality musical instrument gear with up to 50% off.

If you would like to advertise your guitar products on our site, or would like us to write a product review, get in touch with our marketing team let by using the contact form in the menu bar above.