The Morley Cliff Burton Power Fuzz Wah Guitar Pedal has been designed to emulate the vintage 70s wah pedal used by Metallica’s original bassist, Cliff Burton. Built with both a wah effect and fuzz effect which can be used separately or together. The Morley Cliff Burton Power Fuzz Wah pedal offers a vintage-voiced wah, with a knob to adjust the level of the wah effect, and utilizes electro-optical circuitry giving a smooth wah effect, plus, there are no potentiometers which may degrade over time or becoming noisy with age. An LED (Light Emitting Diode) shines on an LDR (Light Dependent Resistor). A shutter then alters light between the two components controlling the function, and this is how that wah-specific sweep through frequencies is created. This electro-optical design ensures smooth pedal control without unwanted noise from potentiometers, which conventional wahs typically use. The fuzz section is switchable between modern and vintage modes, and offers controls for both level and intensity of the fuzz, footswitches to activate either effect, as well as LEDs to indicate the state of their usage.

The Power Fuzz Wah can operate using a single 9V battery or a separately available 9 VDC adapter. Review the product details, compare prices and suppliers for the Morley Power Fuzz Wah Pedal below. There are also other Wah guitar pedals in the Morley guitar pedal range to consider. Also check out our list of the Top Ten Boutique Wah Pedals. 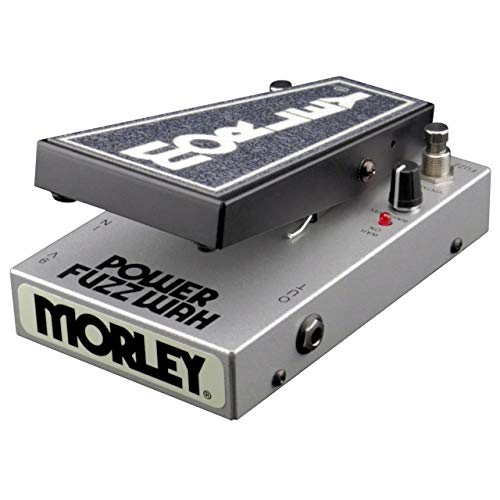 A guitar wah pedal is a unique effect which became popular in the 60s and is still used today.A wah pedal alters the tone and frequencies of the input guitar signal to create a distinctive sound, mimicking a human saying “wah-wah“. The pedal rocking motion sweeps the peak response of a frequency filter up and down in frequency to create the sound. The standard wah effect is controlled by movement of the player’s foot on a rocking pedal connected to a variable resistor however now there are now also a wide number of auto wah pedals available that can sweep up and down based on a control setting. Wah-wah effects are used when a guitarist is soloing, or creating a “wacka-wacka” funk-styled rhythm for rhythm guitar playing. There are a number of wah pedals on the market, from very cheap to high quality boutique wah pedals.

The Morley Cliff Burton Power Fuzz Wah Guitar Pedal is one of many types of Morley guitar pedals that are currently available to buy online and in music stores. The Morley® brand was created in the late 60’s by two brothers, Marv and Ray Lubow. When the Company was first created the brothers called it Tel-Ray Electronics and it was located in southern California. The first ideas for products were born out of Ray tinkering around with the idea of making a smaller version and alternative to a Leslie rotary speaker system. This iconic effect was popular with bands in the 60s however the complete amplifier and speaker system was very bulky and hard to take around to gigs. In 1970 the first compact rotary speaker effect was born and the Morley® brand born. The company continued to many inventive guitar effect pedals including until in 1989 the Morley® brand was sold to Accutronics.

After being sold, products were continued to be developed and manufactured, notably the World first ABY switching guitar pedal and the Worlds first switchless wah pedal or, as they are now know, an auto wah pedal. Since then the company has changes locations and ownership many times until in 2016, Sound Enhancement Products was acquired by M-Wave International and became Sound Enhancement LLC. The manufacturing plant relocated to Glendale Heights, IL, USA where both Morley® and Ebtech® brand products are being produced today. The Morley product range includes many unique and different effect pedals and signature models including the Mark Tremonti wah pedal , George Lynch Tripler pedal and Cliff Burton power fuzz pedal as examples. View the full list of Morley guitar effect pedals.

Our website has many Boutique guitar pedals from suppliers around the World like the Keeley pedals, Strymon pedals, Fulltone pedals and Zvez pedals that are used by famous guitar players. Boutique guitar effect pedals are designed by smaller, independent companies and are typically produced in limited, small batch, quantities. Some may even be hand-made, with hand-soldered connections. These pedals are mainly sold online, via mail-order, or sold in a few music stores. Boutique gear is often more expensive than mass-produced pedals however you will get a product made to a high specification in return, cheap guitar pedals can destroy a performance.

We are adding new guitar gear and related products, including video reviews of products, nearly every day or so. Bookmark the site or join the mailing list to keep up to date with new guitar products and guitar price reductions. Here are our latest posts.

The yumagold.co.uk web site is expanding with new guitar and musical instrument gear being added almost every day. We create reviews of new and existing audio products. If you are a musical instrument gear brand or retailer contact us using the form in the top menu to discuss our marketing options. Guitar marketing options include content writing, new product video reviews and much more. We can help expand your market, grow sales and build brand awareness.

The YUMAGOLD website has all the latest guitar and other musical instrument gear, both old and new, to review, compare prices, buy online and get the latest savings and special offers. We collect together the best prices and special offers that are currently on offer from various suppliers based around the world. Our unique price review system collects online prices together from multiple online stores and generate a list that shows any price offers and savings that exist. To find a product use the menu at the top or the search feature. The current top 35 savings are also included in the SAVE page in the top menu. Making a review of this page will open up a World of savings on top brand guitar amps, guitar effect pedals, guitar strings, amp repair valves, or tubes, lots of different guitar accessories and much more. To get the best deals on guitar gear review the SAVE button in the top menu, also if you join the mailing list using the link below you can register to receive a weekly special offers email.