Built for stage and studio, the Rocktron Classic Wah Effect Guitar Pedal delivers a sweet sound and musical, vintage guitar wah pedal tone from a heavy duty, all metal chassis that includes tension adjustment for the pedal. The Rocktron Classic Wah includes Rocktron’s easy access battery compartment which makes changing batteries simple and straight forward however for pedal boards and long term usage there is also a power adaptor connection. Designed by the Rocktron team in the USA the Classic Wah has frequency range from 400Hz (Heel Down) to 2KHz (Toe Down), Input Impedance of 1M ohm and Output Impedance of 1K ohm. If you are insure about how impedance affects your signal chain then read our guide to guitar buffer pedals.

As with all guitar wah wah pedals, the Rocktron Classic Wah should normally be put in the beginning of your signal chain although you may place your wah anywhere in your signal chain, it usually sounds best at the beginning, directly from your guitar. Rocktron guitar pedals are designed in the USA and are the choice of many famous guitar players, especially the Rocktron rack mounted units. Review the product details, compare prices and suppliers for the Rocktron Classic Wah Effect Guitar Pedal below. 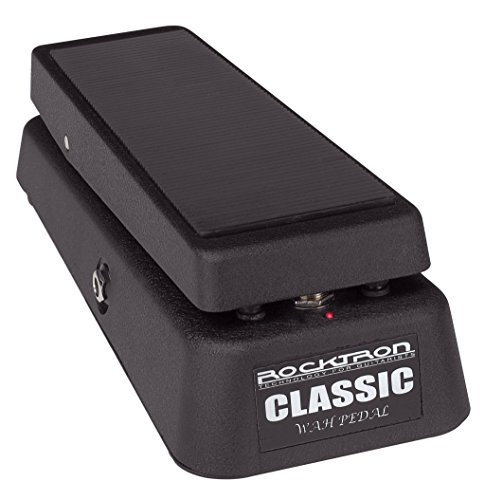 Get the latest special offers and reductions in guitar amp prices and effect pedal prices plus lots of other musical instrument gear by visiting the guitar gear price reductions page. By accessing various online stores it is possible to see differences in the prices and the possible savings that can be taken.

Wah Guitar Pedals became popular in the 60s and 70s. The standard wah effect is controlled by movement of the player’s foot on a rocking pedal connected to a variable resistor however now there are now also a wide number of auto wah pedals available that can sweep up and down based on a control setting. A wah pedal alters the tone and frequencies of the input guitar signal to create a distinctive sound, mimicking a human saying “wah-wah“. The pedal rocking motion sweeps the peak response of a frequency filter up and down in frequency to create the sound. Wah-wah effects are used when a guitarist is soloing, or creating a “wacka-wacka” funk-styled rhythm for rhythm guitar playing. There are a number of wah pedals on the market, from very cheap to high quality boutique wah pedals. A famous wah pedal that was developed in the 60s was the Jim Dunlop cry baby wah wah and this pedal is still used today by guitarists around the world. There are also a number of signature models that have been designed for famous players including the “>dunlop eddie van halen wah, dunlop jimi hendrix wah and “>dunlop slash wah pedal.

If you decide to buy a Rocktron Rack Mounted Unit or a Rocktron Guitar Effect you are tapping into high quality products used by professional guitar players who are loyal to the brand, using multiple Rocktron items in their live and studio setups.

The YUMAGOLD UK website is expanding with new guitar and related audio products being added almost daily. Get reviews, prices and savings on the latest guitar gear. If you would like to discuss our marketing packages and add your new guitar and brand to our site use the links in the main menu to contact us. The YUMAGOLD website has been created for guitarists and other musicians to review and purchase musical instrument and audio gear. Our unique pricing system reviews the prices on offer from online retailers and displays the prices in a list allowing you to review the best price and place your order online. For more savings visit the SAVE page in the main menu and join the mailing list to get the latest email offers and savings.